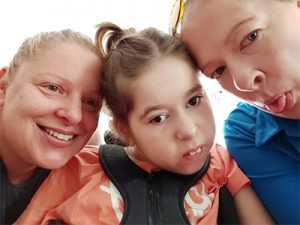 We are thrilled to be able to share with you a fantastic experience we could provide to 12-year-old Sophie, who has Dravet Syndrome, to participate in her year 6 camp. Thanks to our Telethon Trust funding, Registered Nurse Shellie was able to accompany Sophie and her mum Shelley so they could attend.

Dravet Syndrome is a rare, catastrophic, lifelong form of epilepsy that begins in the first year of life with frequent and/or prolonged seizures. But that doesn’t stop Sophie from enjoying every moment. Here’s an update on the camp from Mum Shellie:

Sophie, our nurse Shellie and I just had the most amazing week at the Nanga Bush Camp in Dwellingup. We went with the whole year 6 group from Sophie’s school with a few mainstream teachers. Sophie’s Siena teacher and education assistant went too. Sophie blew us all away with how she coped. She has gained so much confidence within herself from this experience. 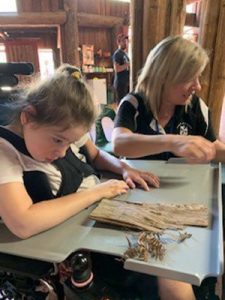 one of our amazing RN’s from Hannah’s House came along to support Sophie. We have been making plans since late last year as Shell took time away from her family to be there for my Sophie. Without Shell committing herself to going on camp with Sophie, she would not have been able to attend.

Sophie’s dad David and I hoped Sophie would enjoy one to two days at camp, but she completely blew us all away and was there for the entirety of four days and three nights. On the second day she was participating in activities, including the talent show after dinner and was active for an amazing 11 and a half hours!!! She was pretty tired, but after a good solid sleep she was up and raring to go the next day.

Without the love and support provided by Shell we know Sophie would have likely struggled as she is very aware of her complex issues and is beginning to have anxiety around doing new things. We talked about camp for months and shared with Sophie that should anything ‘go wrong’, we had every aspect covered and Shell would be there to help her.

On coming home and the trip being so successful, Sophie has gained so much confidence and is so proud of herself. I learned from her that she is capable of doing more daily activities. A huge effort from everyone to make such a special milestone in Sophie’s life so amazing for her.Thanks Shell and thank you


Hannah’s House. We would not be where we are with Sophie without you. So much love for you all. Thanks heaps, Shellie.