In Australia, we recognise March as Epilepsy Awareness Month. Here at Hannah’s House a large number of the children we support are affected by forms of Epilepsy. While Epilepsy as a broad term will affect 800,000 Australians during their lifetime, sadly the children we care for are often diagnosed with the rarest, most catastrophic forms of Epilepsy.

We’d like to you to meet one of these incredible kids – Azzrah. He’s a bright, young boy living Lennox-Gastaut Syndrome, a rare and severe form of epilepsy. But rather than us tell you all about Azzrah, we thought we’d ask a true Azzrah expert – his mum Lisa!

“Azzrah is our 10-year-old little man. He is quirky, sassy, cheeky and has definitely developed an attitude, one that I don’t think we are prepared for. His smile can light up an entire room, 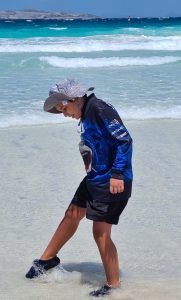 his laughter is infectious, his hugs and love are in abundance for those he chooses to share with. But we have a few new, what I’m calling “uglies” appearing at the moment that are quite challenging. Some biting and hitting, not just himself but me as well. I am hoping it’s a terrible phase that will pack its unwanted bags and leave as quickly as it started.

Azzrah is an outdoor kid and water is his life. Add in bubbles and food and I’m sure his life is perfect. If he had his way, he would never be inside. There isn’t a lot Azzrah doesn’t like, apart from the words ‘no, stop, finish’… and all that goes along with those words. Ok so he may have a few dislikes now I think about it, best not to ponder too much.

At four months old, I had concerns with Azzrah. During tummy time he wasn’t supporting himself on the right side, I took him to a local Doctors surgery and was politely told ‘He is fine go home and stop being a neurotic, older, first-time Mum and enjoy your son’. I often think, ‘if only’.

Azzrah was 6 months old when he had his first seizure. I remember it like it was only yesterday. I was giving him some breakfast when he started doing this strange arm movement. His arms would extend to his sides and raise up, then down. After the fourth time, I knew this wasn’t normal and called Health Direct. After explaining what Azzrah was doing the nurse said, ‘I am sorry I can’t diagnose anything, but I suggest you get your child to the closest hospital as soon as you can.’ At that moment I said to her, ‘my baby is having seizures.’ My gut instinct is pretty spot on and I have often been guided by it but this was one time I really didn’t want it to be right. I got some things together, got Azzrah in the car, called Aaron at work and said meet us at Rockingham Hospital, I think bub is having seizures.

When we got there, it only happened a few more times. We were told to go home and keep monitoring Azzrah. While the doctor went to do discharge notes, Aaron and I were disagreeing with what we had been told and going over what was unfolding. The next thing we knew, a doctor who had been in the cubicle next to us and had overheard our discussion asked to come in. He went over things with us and asked me to show him how Azzrah’s movements presented. It just so happens, that doctor was Dr J Silberstein, an experienced Paediatric Neurologist.

Within an hour we were in an ambulance on our way to Fremantle Hospital. In the following days Azzrah had every test under the sun, only to reveal what would be the beginning of our worst nightmare and our life’s journey for our little boy. Who I might add has always taken things in his stride and head on. He is our superhero.

Diagnoses kept coming as Azzrah got older and as his seizures changed:

The diagnosis changes came as Azzrah’s seizures evolved. The different presentation, multiple types of seizures and drug resistance all pointed to LGS, a rare form of uncontrolled refractory epilepsy. We knew Azzrah was having a lot of seizures, but when you get Electroencephalogram (EEG) results showing he was having seizure activity every 35 to 45 seconds, wow it sure hits you like a ton of bricks. How Azzrah’s seizure activity presented could vary dramatically from lip twitching, body twitching, Myoclonic, Tonic, Tonic Clonic, Clonic, Absence, laughing and eyes.

Azzrah attends school in Victoria Park and it just so happens I work there full-time, so our schedules are full with travel to and from Baldivis to school. Azzrah is now quite competent in the functional use of his electronic PODD (Pragmatic Organisation Dynamic Display) device for communication. Much like anyone else, if he has nothing to say you won’t get BOO out of him, but when he has something to say, he is quite the little chatter box!

Azzrah now has a wonderful support system in place. He has support staff with him five afternoons a week, Saturday’s and three nights a week. This gives me three nights to try and have uninterrupted sleep. Although after 10 years of having Azzrah sleep beside me, old habits are certainly hard to break.

We were lucky enough to be referred to Hannah’s House by our Support Coordinator about two years ago. Azzrah went through a particularly rough time with seizures and we spent a lot of time in and out of status, with loss of functional mobility and multiple hospital stays.

Having Azzrah’s support staff from Hannah’s House has given us confidence as a family to take a little step back and receive help – something I never thought we would have and something we don’t generally ask for.”

Stay tuned for Part 2 of Azzrah’s amazing and frightening journey with epilepsy, including undergoing complex brain surgery to try and give Azzrah improved quality of life and less seizures.