While COVID-19 is the health crisis on all our minds at the moment, let’s take a pause to remember that March is Epilepsy Awareness Month.

Some key facts about Epilepsy:

At Hannah’s House we support children with some of the rarest forms of epilepsy, those considered catastrophic and life-long. These children can experience symptoms and seizures everyday – sometimes multiple times throughout the day. These forms of epilepsy currently have no cure and don’t always respond to medication.
We’d like you to introduce you to one of these brave children – Kobe. We asked Kobe’s mum Sarah to share insights into Kobe and his family’s journey.

Can you tell us a bit about Kobe?

Kobe is a cheeky 3-year-old-boy, who loves cars and motorbikes. He adores his older sister Maddi but really doesn’t like to share with her. Kobe is not sure about anything that makes an odd or 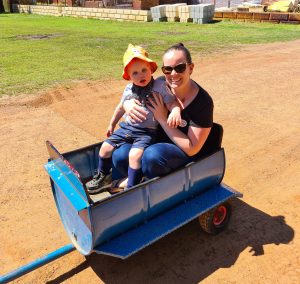 Can you tell us a bit about Dravet Syndrome and what that looks like for Kobe?

Dravet Syndrome is a rare (1 in 20,000-40,000 live births), genetic, largely drug-resistant form of epilepsy. It’s characterised by progressive, frequent, and prolonged seizure activity that result in varying degrees of developmental disability. Kobe is on four anti-epileptic medications and unfortunately still has regular seizures. Kobe had a 2–3-week period over Christmas 2021 where he was in a consistent state of seizure activity. Events like this cause skill regression and then Kobe has to work really hard to get them back again.

When (and how) was Kobe diagnosed with Dravet Syndrome?

After six months of seizures every few weeks (the longest being 1.5 hours) finally Kobe was diagnosed with Dravet Syndrome at 11.5 months old via genetic testing that showed he has a gene mutation in his SCN1A gene.

What was it like receiving the news that your child has been born with a rare disease?

It’s really hard explaining or putting into words the sinking feeling you are left with after leaving a routine follow-up appointment with news that will change yours and your children’s lives forever! We were scared and very unsure of what the future held and didn’t even know where to begin. I am pretty sure we both drove home in complete silence. I know for me, the first thing I felt was overwhelmed and that I couldn’t do it.

The diagnosis that Kobe received is catastrophic and very unpredictable, no one can tell us what his future will hold, all they can do is give us facts that don’t paint a very good or hopeful picture. 80% of kids with Dravet Syndrome end up with developmental delays of different extents and 20% don’t make it to their early adolescences. These are not stats that any parent wants to hear about their baby.

Have Kobe’s needs changed at all since then, and if so, how have they changed? 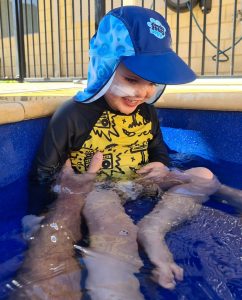 Kobe’s needs are forever changing and we just have to learn to adjust thing as we go. An example of this is after the events over Christmas 2021 Kobe now has a food aversion and is gagging on nearly everything that goes in his mouth. This resulted in needing to feed him via a Nasal Gastric tube and he has just this week had a PEG inserted so we always have a back up way of feeding him. We hope we can get him back on track with eating orally

Can you tell us about Kobe’s triggers?

With Dravet Syndrome triggers are always changing and something that was a trigger today can go away but then pop up again down the track. Kobe has had periods of photosensitivity, where he was having seizures due to bright and/or flashing or flickering lights. This was hard because as soon as we stepped outside Kobe was having seizures. We found a way to manage this by using eye patches as we were advised by Kobe’s Neurologist that to have a seizure due to Photosensitivity you need to be looking with both eyes. We found this really helped Kobe.

What does a week in Kobe’s life look like?

Kobe has 2-3 therapy sessions at home every week. There is a lot of time is spent feeding Kobe and administering medications with any remaining time left spent playing and doing still building activities.

What misconceptions do you think the wider public has about epilepsy?

The biggest misconception I think the wider public has it that people with epilepsy can just take a medication that will stop their seizures and they just go on living a normal life. Unfortunately this 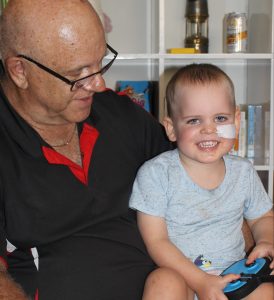 is not true and even the people that do get control of their seizures via medication still have ongoing struggles that they need to manage on a day to day basis.

How does Hannah’s House help support Kobe and your family ?

We were referred to Hannah’s House when Kobe was 18 months old by Kobe’s Support Coordinator. Hannah’s House has been an amazing asset to our family by providing us with support in caring for Kobe. This has helped me get some time out to recharge, spend 1:1 quality time with our daughter and has given Will and I time out together as well. Our team have help us raise issues with Kobe’s medical team and then helped us resolve or manage it going forward.