Sensory Outing and Activities for Christmas

Fun activities for the school holidays!

How play can promote communication

During Feeding Tube Awareness Week (6-12 February), we’re celebrating the launch of an awesome new resource for ‘tubie newbies’ – The Blend magazine. Created by freelance journalist and tubie mum Melanie Dimmitt, The Blend is a mix of stories, recipes and advice centred around tube-feeding. Hannah’s House is super excited that one of our families, Wyatt and his mum Erin, are featured in the first edition of The Blend. Read their story below…

Perth-based mama Erin De Jussing is getting out and about with her tube-fed son, Wyatt, thanks to a little help from their Kangaroo enteral feeding pump.

“I was very nervous about Wyatt getting a feeding tube. I didn’t want it. He had to get the NG first and then he kept throwing up his feeds. After weeks of hospital stints due to dehydration, we felt like we had no other option but to get a PEG. Once we were a few weeks post-surgery, I couldn’t believe we’d waited so long to do it. I love it.

Feeding Wyatt is so much easier and safer now, and knowing that his nutrition is going where it needs to be, and there’s no risk of aspirating and getting pneumonia, has made a huge, huge difference. Wyatt’s weight has always been under, but once he got the PEG, he finally started putting on weight.

My advice to other tube-feeding parents is to find what works for your family. Wyatt loves his walk, so we attach his Kangaroo ePump to the side of his pram, connect his feed, and off we go.

I think people feel like, because there’s so much equipment, it’s just too hard to go out for the day – but I feel like it’s the opposite. If we’re going out for the day, I’ll pack a couple of feeding sets and bottles of formula. Then we’ve got the freedom to feed Wyatt as he needs. 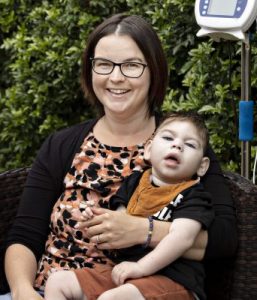 If Wyatt’s not tolerating his feeds during the day, or if he’s not reached his volume target, I love that we can give him that little bit more, and put the pump on at a slow rate while he’s sleeping. It’s just having the freedom to chop and change to suit you.

It’s really not as scary as it looks. Everything is teachable, you know? At one point I didn’t know how to drive a car, but I do now. You can learn these things as you go and once you get six months down the track, you’ll think, what was I worried about? And then you find yourself helping others who are going through the same thing.

It’s just about being open-minded and not overthinking it. We overthink everything – especially when it comes to our kids – and we think too far ahead. We’ve just got to bring ourselves back into our day and remember, it’s OK.”

Photos by Carri Forrester of All About Image Photography.